The scholarship was created to recognize Doug's honor, integrity, determination and love for the sport of field hockey.  As an official, assigner and creator of the Central Ohio Field Hockey Officials' Association, Doug's passion for field hockey was known to all who knew him.  Recipients of the scholarship will be field hockey players who have demonstrated the same courage that Doug's showed in the face of his own battles with cancer. CLICK HERE FOR SCHOLARSHIP APPLICATION 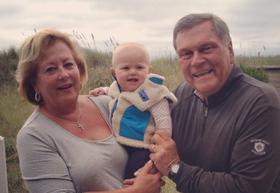 Beyond providing scholarships to local athletes, our goal is to promote pancreatic cancer awareness through our organization.  Supporting research is fundamental but we also strive to shine a light on the issues that cancer patients and survivors courageously face everyday in their lives.  Our goal is to inspire hope!

we believe IN FIGHTING THE FIGHT AND FINDING A CURE!

The Doug Campbell Courage Scholarship was created in August 2015 by the Central Ohio Field Hockey Coaches Association.  The award was created to recognize Doug's contributions to the field hockey community and create a scholarship program to benefit Central Ohio field hockey players who have shown similar courage in their lives.